Out in the world Aiur can be as hard to pin down as smoke, using a few “faces” while coming and going. While off duty or leave, Aiur will take on the face of Kari Joy- a young lady with shoulder length black hair, soft friendly features, as well as shocking blue eyes. Among the Shields of the King, Aiur is “himself”, Shield Mourne- a hard faced young man with short black hair, and the same blue eyes as the Kari counterpart.

Wraith is the persona adopted while conducting field operations for the Dark Lanterns, a person of indeterminate gender or race beneath a hooded cloak and black mask. While among peers of the Lanterns the Changling will take on the expected appearance for one of the race, skin as white as the first powdery snow of winter and hair like fine strands of undyed silk and has appeared as either gender.

Aiur was born to a human father and changling mother. His father was an officer and his mother was a infiltrator/saboteur of the Breland military. Ever since he can remember he was expected to be in the military just like his parents. As a child he would get his education in the same way as others his age, but his free time would be spent either with his father discussing historical battles, tactics, and combat or his mother learning this finer points of stealth, infiltration, sabotage, and poisons. Although his upbringing during this period of his life was full of preparation for his future he was allowed, at times, to just be a child. It would be at a young age that Aiur would learn the prejudice leveled against one of his heritage. At first nobody knew what he was, he had adopted a face not unlike a very young version of his fathers. As he made friends he wanted to show them all what he could do because he thought they would enjoy what he could do. Instead this caused them to denounce him as a freak and turn against him. Things got even worse when the parents of the children found out. Once it was known there were at least 2 changlings in the neighborhood people began to yell hateful things at him, vandalize his home, and on one occasion a group of drunk men cornered him and threatened to kill him if he and his family didn’t leave. A promotion his father had gotten moved them all to Sharn to a nice home in the Sunrise district.

This move, although beneficial for the family, kept his parents away more and more often. It was decided that Aiur would continue the training his parents wanted him to have but they themselves no longer give under a guild that his mother herself had ties with. This secretive group called itself the Ebon Path. Between the ages of 8 and 16 he trained beneath his Master, Gelt. It was during this time he learned the fine points of assassination, and found he had a knack for poisons, venom, and alchemy as well as discovering his talent as a soulblade. When the war came he was unaffected at first, and merely continued his training and studies. But soon the Ebon Path itself was called by Breland to action. Aiur didn’t quite understand why he would have any hand in the war, but did as he was bid by his Master. Together they infiltrated seemingly insignificant and random places where they murdered, or poisoned a variety of people. Women, men, elderly, and some near his own age were killed over the next 2 years. It became clear later on in his life that what they were doing was changing the psychological face of war by targeting the family and friends of the people would would be leading the battles in the Last War.

As quickly as they had started it all came to an end and he was sent back home. There he had learned both of his parents had been killed in the war, and he was to become a ward of the state until he came of age. He spent his next 3 years continuing his education in Sharn before being released and his family home in Sunrise returned to him. He was noted as being something above your average war orphan while a ward of Breland and was approached to take on a role in the Dark Lanterns. While not participating for a mission with the Lanterns he was expected to maintain cover as a Shield of the King.

During a recent operation with his team the whole mission became a mess, when Aiur needed to lay low he took a trip to the Eldeen Reaches. There he brushed up on his Elven as well as honed his combat technique. 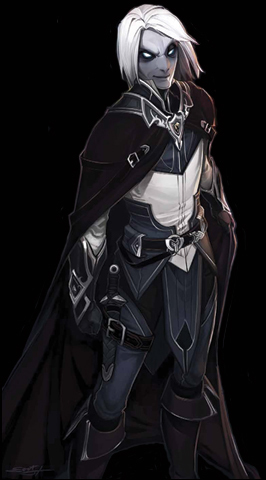