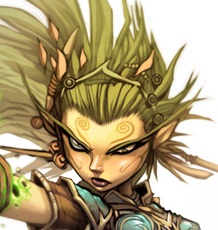 Jemmabeth, Jemma to her friends, is a river gnome druid shapeshifter with healing arts. She is in the prime of her adulthood and stands approximately 3’ tall. At 35 lbs she is slender, but just barely curvy enough to avoid willowy. Her gray eyes watch her greenish blond hair perfectly, earning her the term cutest girl in school before she ran away.

Racial powers:
Misdirection
Not me this Time
+2 AC against opportunity attacks

Jemmabeth (Jemma to her friends) was born in Thurimbar to a family of scholars. Her parents loved to learn and had studied abroad at various universities; however, having experienced the world, they wanted to protect their children from it and the war that had been raging for decades. They taught their three (3) children everything they knew while restricting them to their local community, never taking them more than five miles from home. They worked to instill in their children a love of home and a healthy fear of the world outside.

They failed with Jemma. They knew they were in trouble when Jemma read their entire library by the time she was 15 years old and demanded more. She remembered everything she saw, heard, smelled, read; and could recite precise details from memory. But learning things from books wasn’t enough for her. She wanted to learn about the people around her: people fascinated here. She watched and learned and used that knowledge to get her way. Her parents tried to keep her close, traveling to Korranberg and introducing her to the library there. They tried, but she was too curious and too stubborn.

Jemma was 35 when she packed a small bag with some food and her most favorite things and snuck out of the house late one night.  She wandered around Zilargo and the southern edge of Breland, picking up odd jobs and using her talent to learn, and remember, everything. Eventually she was “discovered” by certain elements who found a Gnome with photographic memory exceedingly valuable. Jemma soon found herself in a situation where people bigger and stronger than her used their strengths, and her weaknesses, against her. It was Caleb who rescued her from the clutches of The Aurum, though he would never admit it; and Caleb who told her to learn some survival skills. Jemma had long yearned to study with the druids of the Eldeen Reaches so she set off to learn to become a druid. Caleb allowed her to bum a ride, dropping her safe and sound in the arms of the Druids.  And she promised to tell no one the truth about Daisy.

Jemma spent seven wonderful years in the Eldeen Reaches, learning all she could about the ways of magic and the Druid way of life and becoming an adept as a Druidic shapeshifter. She learned how to defend herself not only with her knowledge, but with her magic and her wits. She spent another three years growing more and more restless before she again took off. With her knowledge of the world expanded, and her physical body protected, Jemma spent the next twenty years traveling all of Korvaire. She met people, and learned. The lessons that stuck with her, that became her personal creed, were that knowledge is power if you are strong enough to use it; the world is not a friendly place; but everywhere you go there are friends to be found. She made “friends” of everyone, either through her kind and generous nature, or by knowing their secrets and not being afraid to use them.

Of all the places she went, though, she found Sharn, and particularly the Morgrave University, to be her favorite. She loved the freedoms the citizens had, the streets and crowds, the structure of the city itself, even the lower elements of Sharn had a place in her heart. So when representatives of the King’s Citadel started asking Jemma for information and help with some of their missions, she was more than pleased to help. Having a photographic memory, and friends in all the right (and wrong) places made their requests simple enough, and fun. She enjoyed traveling the continent helping the people she considered her people and was both pleased and flattered when Meliana ir’Villene herself approached Jemma to join the Dark Lanterns (she was so shocked, she cursed in Gnomish, much to Meliana’s amusement). Jemmabeth found the assignments interesting and challenging, and was pleased to help the city she loved so dearly.

Jemma spent the last 10 years of the war working “officially” for the King’s Lanterns and is happy to be continuing this work. The financial benefits allow her to travel and study as she pleases, and she finds plenty of opportunities to learn with each new assignment. Her only regret is that lives are often lost, as they were on this last mission. While Jemma understands the pain and costs of life in Khorvaire, the principles she learned as a druid, to value all life, remain with her. She mourns each death, even when she is the cause of it. 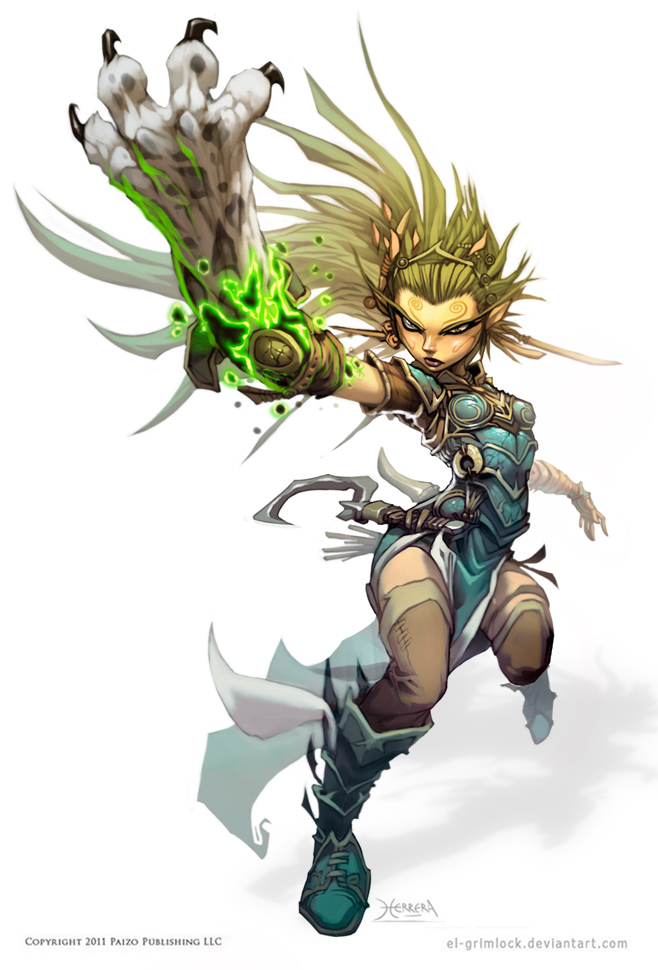