A tall and gorgeous human woman from Aundair who serves as the ambassador from Aundair to Zilargo. Known as something of a hedonist, a show-off, and a lush, she loves to party and sleep around, but anybody who thinks this makes her any less of a skillful diplomat and negotiator is in for a tremendously rough time. Rumors abound that she has ties to Aundair’s intelligence service (The Royal Eyes) as well as connections to several different Dragonmarked Houses, notably House Lyrandar and Orien. She’s been in Zilargo for several years and it’s a testament to her skill as a diplomat that, despite the paranoid and spy-ridden society there, none of her secrets have crept out into larger knowledge. 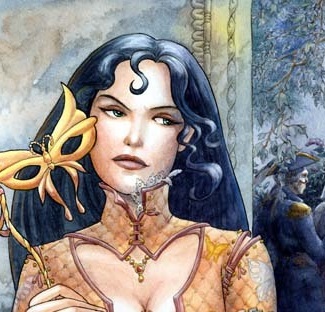