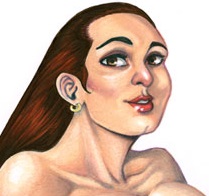 Meliana ir’Villene is an attractive gnome woman who looks to be in her late twenties or early thirties. With her long black hair, cute face, and curvacious body, she looks more like a well-to-do merchant or noble than an experienced and efficient spymaster. ir’Villene plays up this role, dressing in clothes which emphasize her looks and hopefully gets those she deals with to underestimate her intelligence. Her public personality is energetic, bubbly, and unabashedly ditzy. Her professional personality still has the same energetic and lively undertones, but far less so in comparison to the efficient and serious manner in which she conducts Dark Lantern business.

Publically, ir’Villene is still part of the King’s Citadel as a member of the King’s Wands. Her job as part of the King’s Wands is vague and nebulous but generally accepted to be as a staff illusion expert. She actually is perfectly capable in this role, since she is a skilled wizard specializing in illusion and divination magics. Her role in the Dark Lanterns initially was similar, as she lead infiltration teams behind enemy lines to gather intelligence and sabotage supplies during The Last War. She rose through the ranks after the war as she demonstrated higher level organizational and leadership skills and was eventually promoted to the head of the Sharn field office, one of the youngest ever to hold such a rank.

ir’Villene is known within the Dark Lanterns as a tough taskmaster, taking the security of Breland very seriously and expecting the best from her agents. However, she is never unfair and agents are always pushed to learn more and get better through any mistakes that are made. She ensures that agents have proper support and backup, but is careful never to micromanage or allow the oversight to get in the way. However, she knows that if worst comes to worst, her agents (and herself, if need be) are expendable if it means protecting Breland. She isn’t afraid to make the hard decisions and knows that the blood of many people, some of them innocent, is on her hands.

Back to King’s Dark Lanterns
Back to NPCs